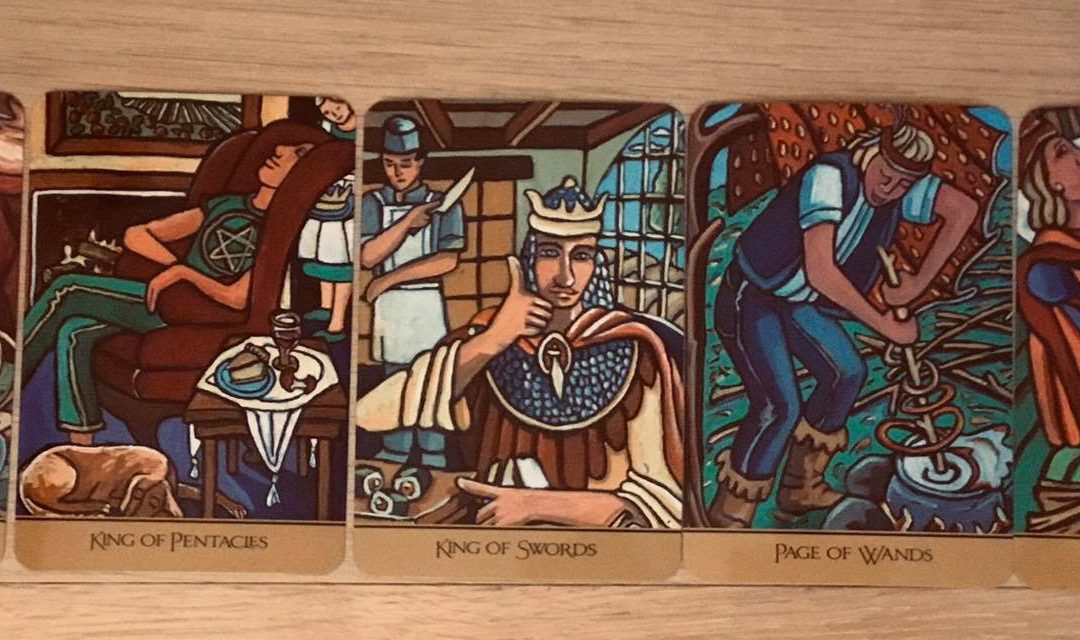 Let’s look at what this week has for us.

Ace of Cups- open your heart to new experiences

King of Swords- use sound judgment

Page of Wands- look at things from a new perspective

Knight of Wands- seize the moment without thought.

This is going to be an amazing week for many of you. It could be uncomfortable for those who don’t like change or trying new things. You will be pushed this week. Let go.

Ace of Cups- The Pouring Of Blessings

The steam from the pot of tea is drifting in and out of the cup into which it has been poured. The shape of the heart is formed as it wafts away and curls into a traditional poster of the ace of cups that is printed to a wall. The steam then drifts towards the painting and seems to mingle with the five streams of water that is shown flowing out of a golden goblet. A bird is holding a ribbon in its mouth. As the ribbon falls, it becomes water flowing into the cup.

The face of a woman who is pouring the tea is invisible to us, but we sense there is a smile on it as she lifts the rounded white pot. There is a cheerful design of bright red hearts on her tea set. The cup itself rests on the round table, covered with a cloth that is alive with the pattern of a lotus blossom. It is a warm and welcoming scene.

What stands out to you? Let’s break down some of the symbolism.

Take cultures very across the world. In Japan, there are numerous tea ceremonies that symbolize anything from good luck in a marriage to an apology for wrongdoing. And Baltic culture, one is considered to be part of the family after sharing a third cup of tea. To set aside time for tea needs to set aside one’s personal concerns and focus on building a relationship with others. In Britain, a cuppa tea is a cure from anything from a headache to a near-death experience. To dream of a teapot indicates one is having concerns regarding the heart, emotions, or the circulatory system. The teapot itself can be considered the wellspring of warmth and unconditional love.

The lotus grows in shallow muddy water. These are generally considered unfavorable conditions, yet the blossoms are magnificent and never seem to have a drop of mud on their petals. Due to the ability to drive thrive under adverse circumstances, they have become the symbolism of motivation. They are highly prized in Hindu and Buddhist religion as symbols of youth, beauty, life, and spiritual grace. And this card they symbolize a blossoming of consciousness or emotional awareness.

“I will open the windows of heaven for you. I will pour out a blessing so great you won’t have enough room to take it in! Try it! Put me to the test! Malachi 3:10

All aces symbolize new beginnings. The ace of cups is a source for emotional well-being, brought about by unconditional love. The tea pot as a vessel represents the source of all emotions. The active pouring liquid from a central vessel source to smaller, waiting vessels is synonymous with receiving little blessings, it’s such a form of communion. And traditional cards, the five rivers seem to flow from one central cup to represent the true awakening of the five senses.

So what message does the Five of Cups have for us today?

You are on your way to a new emotional wakening. It could be a relationship with yourself, others or a professional opportunity. You could be diving into doing some spiritual work on self.

Do you have a difficult time with change and receiving new opportunities? Let dig deep into that. Schedule your reading with Priestess Contessa at contessalouise.com/readings