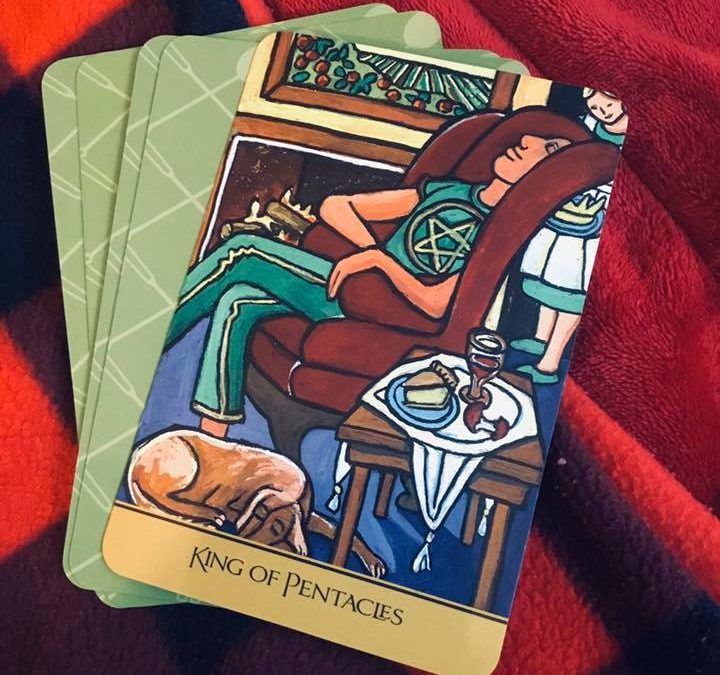 Ace of Cups- open your heart to new experiences so they can pour you a blessing.

King of Pentacles – Do The Things That Bring You Joy

The king is very comfortable. The warmth of the fire, the snoring of his dog, and a full belly have loved him to sleep. He is very casual dress does not look very regal, despite the large gold pentacle in blazoned on his T-shirt. There’s a slice of apple pie and a glass of red wine waiting for him when he wakes up. It would seem that he has already eaten the apple, just as the core remains. The only thing that prevents the scene from being a template for domestic harmony and bliss is the woman hovering in the background. She’s wearing an apron and has her head bowed why she holds a crown on a platter. Is this the queen who has bake the pie and I was humbly waiting for her husband to wake up and assume his nightly duties? Is she being quiet out of consideration and does not want to disturb his brief moment ever a prize? Or is she afraid to wake him because he will be angry and threw the Applecore at her?

What stands out to you? Let’s break down some of the symbolism.

All kings represents power in success. There are also all associated with the element air allows the intellectual prowess and ability to make decisions and a fair and rational manner. As penciled calls aren’t earthbound suit, the king of pentacles is ruler over all earthly concerns. He said to his attention on family and home but is equally successful in the world of finance. He has a reputation for being kind and generous provider. He is known for his appreciation of the finer things in life, and loves children and animals.

And this card there are actually two Pentacles. The one that is on the shirt, and the one that is hidden in the poor audience. Apples are also seen Mrs. Amble‘s longevity and prosperity. They can also be a symbol of discord. The Adams apple and the man is supposed to mark the spot for the apples on the garden of Eden stuck in Adams’s throat after he took a bite. It symbolizes the fall of man. The Apple cord in part tribute to the goddess Kore, closely associated with the ritual surrounding the pentagram into the phrase getting to the core of the matter. Peel back the layers in order to get to the real issues at hand.

She is hiding in the background. Holding the crown or the symbol of power and leadership. She doesn’t know if she should wait or interrupt his peace. She reminds me of nervous energy. Of fear. Of the what if’s. I’ll get into more about this in a bit.

The king of pentacles is shown resting in a large comfortable chair, this ice closed and a smile on his face. He is the perfect personification of domestic commitment. He’s the only king to be shown with closed eyes. This is because he is the most sensual‘s of them all. He indulges in his physical needs and he is secure in the knowledge that he is safe and will remain on disturbed. The woman waiting patiently in the background holding his crown knows this. She does not appear to be resentful, although her head is bald in the subservice manor.

So what message does the King of Pentacles have for us today?

I want to focus on how content the king of pentacles is. He has no worries. He has no cares. He knows that he is a well protected. He is the king of his castle. And no harm can come to him. He is free to enjoy his life. Every single moment of it.

And this card we are both a king and the woman in the background. How many times have we sat down to rest and take part in the joy that this life has brought us, but instead of taking part we’ve disturbed our own peace?

Why do you resist saying YES to you? Let dig deep into that so that you can be free to enjoy life. Schedule your reading with Priestess Contessa at contessalouise.com/readings