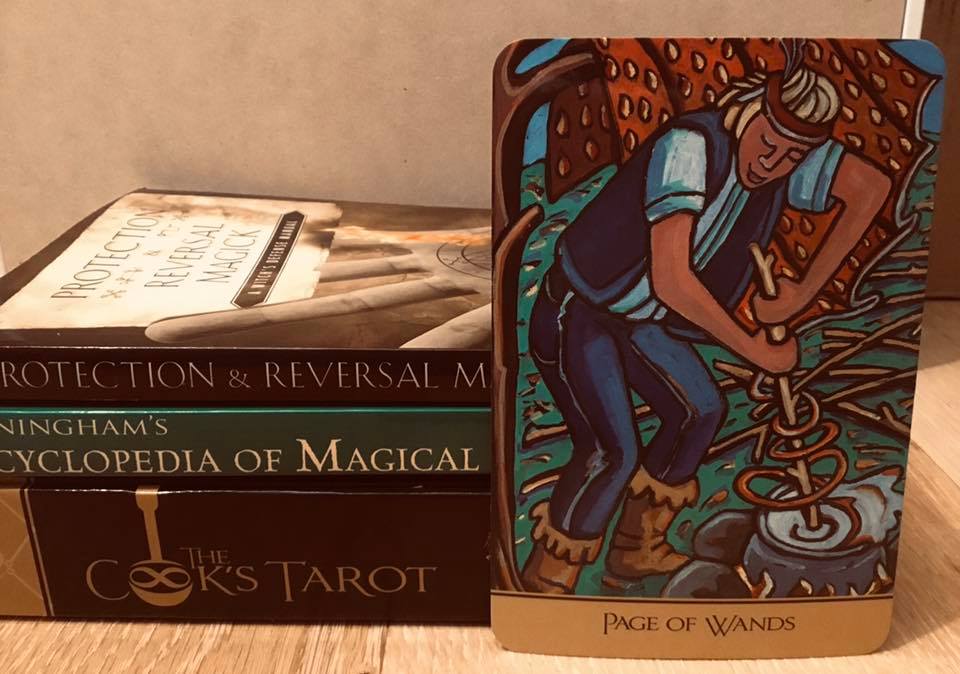 Ace of Cups- open your heart to new experiences so they can pour you a blessing.

Page of Wands – Stir It Up or Nah

A young man wearing a red feather in his headband is busy stirring a pot with the stick that he has cut out from a nearby tree. He has made a campfire, and is in patiently trying to bring the water to a boil by further agitating it. The water spilling over the sides of the pot, and the fire is in danger of being extinguished. A piece of wool from the pages cloak has been entangled in the stick. Although he has noticed it, he has not removed a thread as it’s creating an interesting pattern and he thinks he could be inventing some new form of cooking implement.

What stands out to you? Let’s break down some the symbolism.

All pages are considered to be messengers of some kind. They don’t have to be people, Messages can come from songs, tv or an TMZ blog post. Pages belong to the element earth as this is where seeds are planted and new ideas begin. The page of wands and earth is earth in the suit of fire. Fire burns the earth and the earth is made more fertile by the resulting debris. This combination of elements give the page his passion and energy which serves as the perfect catalyst for new ideas and inventions.

Wands represent the start of a venture that begins with an idea or conception. Once also signify the element of fire that speaks to passion creativity and enthusiasm. And this card, a physical one is being used as a tool to stir things up.

Feather at the top of his head

crown chakra and connection to spirit. And the color red for passion and freedom.

The pager was a very busy soul always trying out new inventions that test the limits of his imagination. He is impatient with things that seem to take too long to work and as a result, always starting from one project to another. He has 1 million different ideas some of which are brilliant and deserve careful attention and order bring them to fruition. His earthly energy help stabilizes the creative impulses that the fireside of him wants to burn out of control.

So what message does the Page of Wands have for us today?

Are you getting in your own way? Stirring up things that don’t need to be stirred? Let’s figure how to get you your blessings. Schedule your reading with Priestess Contessa at contessalouise.com/readings